I-SMILE 15PCS Replacement Bands : size and functionality to the OEM fitbit band – Included strap guards to prevent the Fitbit coming undone due to snagging or oth 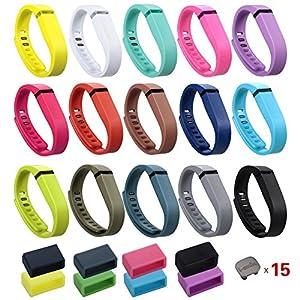 I wear one of these 23hrs/day, and i’ve had them over a month. I haven’t cycled through all the colors yet, but so far they’re all identical in quality. I do not have trouble getting the fitbit in and out of these, however i expect that if a band ever breaks, the plastic will tear or otherwise fail somewhere around the insertion point (just as my oem fitbit band did after enough time. )pros:- identical in appearance, texture, size and functionality to the oem fitbit band- included strap guards to prevent the fitbit coming undone due to snagging or other major strain on the fastener- many fun colors for a fraction of the cost that it would be to get that many different oem bands- seemingly quality construction that should withstand repeated insertion and removal of the fitbit for quite some time. – they don’t seem to pick up marks or scratches at all (i was worried about how the finish would hold up; they look great)- colors are fairly true to the photos provided, and are quite vibrantcons:- the material is just a little stiffer than an oem band. (unnoticeable when you’re wearing it, but an obvious difference when you go to remove or reinsert your fitbit. This does not affect functionality or durability. )- others have warned that the silver pattern on the one patterned band will wear away quickly. I choose not to wear it often because of that, but after a few days of use my band design shows no signs of wear. – the display window in the bands creates pressure points against the led bar of the fitbit itself, causing it to look like you sandwiched some tiny water droplets in between the fitbit and the view screen.

So far, so good with the quality of them and i love all of the colors. Love that they come with enough fasteners to have one on each (i even got an extra one), so that i don’t have to change them out all of the time.

I purchased these to give me variety with my fitbit flex, i love to dress up and down and basic black was not cutting it. I worried because friends have bought other replacement bands and they have either came apart at the window or do not stay ‘buckled’ with the included posts. These are true to size, the large fits exactly in the same hole i wear the original band in. Window is not tinted and lights are very visible, which i like. Included metal brackets hold well. I have worn several of these with exercise, sleep, and work/daily activities. No problems with any of the bands i have worn so far: white, aqua, brown, light grey, and slate. Very satisfied with this purchase. If i experience any problems, i will amend my review.

This item was exactly what i hoped. The package arrived with 15 wristbands, 15 metal clasps, and 4 silicon fastener rings. I ordered the small size, and they were exactly the same length as my fitbit brand original band. The plastic is the same density and stiffness as my fitbit brand band, as well. The viewing windows are clear on the lighter colored bands and smoke-colored on the darker colored bands, and band colors in real life look just like in the image. All in all, these seem to be of very good quality for a nice, low price.

Keeps your flex from falling off your wrist. A more secure band than the original one flex comes with.

I chose the 15 piece package and it is a great deal for the price. I got everything that was in the product description and pictures, with one minor change and some additional items: it did not come with a black silicon fastener ring, but instead it included 3 pieces of extra wide black silicon fastener rings (more on this later). It also had an extra navy/teal/white stripped band, and a bonus gold metal charm, which was really nice (see picture). I bought the large sized bands even though my wrists are tiny and can fit the small comfortably. I got the large size because i am a painter and when i am working, i like to move the band higher up on my arm to keep it clean. I’ve had these bands for a week so far. I wore the white, orange, teal, and rose colors out so far. Another post mentioned an inconsistency in quality and i notice it too. It seems like 5 of the bands have a smaller font that indicates the size of the band, while the rest has a larger font (see picture). The ones with the smaller font fit the metal clasp better. 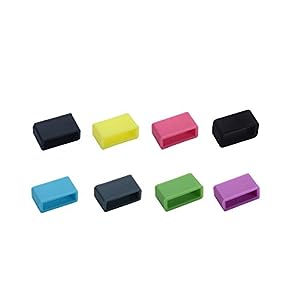 This is exactly as advertised, from the colors to the size (there is no red, oddly enough). I ordered size large based on reviews and the ismile manufacturer’s fit guide. The fitbit flex fits nicely into the slots; it was not difficult to fit it in. I love having a variety of colored bands to use. The material is comparative with the original fitbit band i received with my tracker and couldn’t be more pleased. I will need to buy that red band elsewhere. I noticed that some of the reviews that were lower-rated were from a manufacturer not fulfilled by ismile. Because i was a little apprehensive about buying a product i wasn’t sure about, i opted for the prime option that was a little more expensive in case i needed to return it.

I bought from i-smile for quality reasons. When i received the package, i noticed some of the bands were extremely hard to open and close (and i mean it took me literally 5 good minutes and some tool just to do one, because it was so hard my thumb hurt). Then i picked up other colors and noticed they were easy to handle, and that’s when i realized that 4 of the bands says ‘i-smile’ and 11 have nothing written on them. The i-smile bands says ‘s/p’ for the size in a narrow font, while the blank ones have a wider font. The i-smile ones are easy to open/close, and the other 11 are super hard. I guess 4 bands for $12 isn’t bad, but i was expecting to be able to use all 15. Fyi, mine came with 8 of the rubber thingies, and 15 clasps (14 of which say ‘i-smile’; 1 is blank). I’m on the fence about returning. I really don’t want the hassle.

Arrived quickly and far exceeded expectations. These are at least as good as, if not better than the original flex band that came with my fitbit. I especially love the little clasp covers that come with this set, as they keep the band from coming unsnapped. I like to wear my fitbit all the time, including sleep, as i don’t get much rest and like to keep track of my sleep hours. I can’t tell you how many times i’d wake up with my original fitbit /band under my pillow or covers, or under the bed. I have never lost (or had fall off) my fitbit flex with these new bands. Great assortment of colors, so something to go with each change of clothes, while working in the yard or dressing up for a wedding or nice dinner out. Love and highly recommend this set.And you can’t beat the price / value. 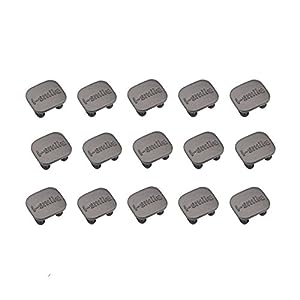 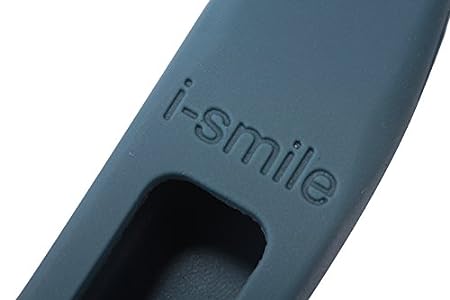 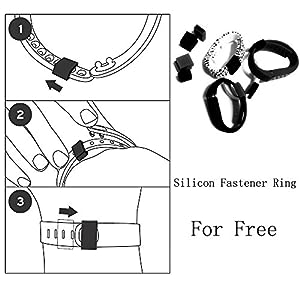 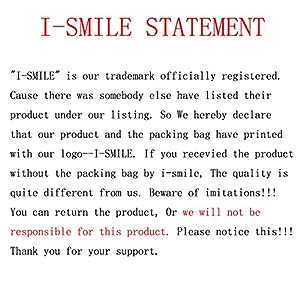