The unit does not show any signs of life. Update: received a second unit. The bike mount is very poorly designed. It looks similar to garmin, but it is not compatible. Also it does not securely attach the unit to the bike and v650 wobbles on every bump and eventually slides to the side and have to be manually returned to the “face-up” position. Mount design is close to idiotic, rubber padding is slippery and base is not compatible with zip ties.

After few attempts i was able to sync the meter to my mac & iphone. The documents provided with the meter need to make it clear to use a computer for the initial charge. That’s when the meter is registered and allowed to sync. After allowing the program to change privacy settings on your computer. The request for this change is not clear that the polar flow app is requesting this change instead it is i believe is the program developer.

Upgrading from the m400, this product does what it says on the box.

This unit helps me so where energy is going as well as other data that help me become a more efficient cyclist.

I am very happy with the product. The screen is hard to see under the sun but overall the battery and performance and accuracy is very goodi will recommend this product.

Syncs to mobile and then strava in seconds. Tracks every feature of the ride and the auto pause is a great help.

*****update***** i’ve used the v650 for about three months now. I ride my bike about 5 times a week. My v650 has the most recent update (software version 1. I still generally like the v650. I find the gps works very well. I never have any issues with gps. Occasionally, the v650 unit has trouble pairing to the speed and cadence sensors on the bike or with my h7 hrm. I select ‘search for sensors’, and it usually finds them right way. It is important that your hrm is not paired to another device (such as a polar loop or your phone), as it will only pair to one device at a time and you must un-pair it with the other device before it will pair with your v650. I do find the v650’s screen hard to read in bright sunlight while wearing sunglasses. For example, it is tricky to see if you are paired to all the sensors in bright light. 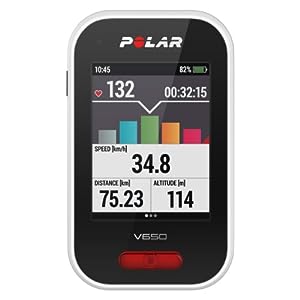 For my needs, it has been very useful. Easy handling and immediate information.

Its a very good product, awesome design, features, you can analize a lot of data, power, heart rate, speed, cadence, love it. But there is a problem, it doesnt have ant+ connection, so be careful.

A little of receipt lag but in general the product operate good.

For the price of other bike computers the polar v650 is a bargain. Its excellent design and easy-to-read screen with customizable options ensures you won’t ever have to wonder whats going on during your ride. At first there were a few issues with syncing, somthing which i wasnt a fan of but didnt mind too much. With the new software and fixed glitches its better than i dreamed of. Recommended if you are serious about your riding and keeping stats but not soo serious about going broke in the process.

I purchased this bike computer to replace the polar c600 i had before. This one is easier to setup and configure. I have the bluetooth hrm, speed sensor and cadence sensor and when the sensors work, they work well. I say it like that because on two occasions, i needed restore the unit to the factory settings, after which i had to reconfigure everything involved, hrm, speed and cadence sensors, bikes, etc. To use the product, you pull your bike out, turn the unit on, wait for it to recognize the gps satellites, your hrm, sometime with a little luck it may also recognize the sensors; i say it like that because they only start transmitting when activated, which is when you push off. If you want to eliminate that delay, you could always spin your front tire (where i have the speed sensor), and spin you peddle so the cadence sensor starts transmitting. Once the v650 is ready to go, hit start and then begin your ride.

Love it for heart rate monitoring and cadence and speed. Wish it had connection to phone for caller id and music.

I see that i am only the second customer to review the new polar v650 and the first reviewer only gave the unit 2 stars. I am not hesitating to give the unit 5 stars and highly recommend the v650 to any bicyclist wanting to track a variety of performance parameters while riding. This bike computer is replacing the bontrager node 2. 0 purchased in the spring of 2014. Before buying the v650 i also kept looking at the garmin edge 1000 and garmin edge 810 as two other units i was considering. In the end i decided i did not want or need a gps map display of my bike route while riding. I know where i’m going and i ride my bike to achieve my fitness goals including weight control. What i wanted and got with the v650 was to have several parameters clearly visible on one screen. What i’m most interested in while riding are the following: duration, speed, heart rate, cadence, distance, and elevation.

Great product all in all, big color display visible in direct sun light, syncs well with polar cadence sensor, i bought for my new p1 power tap peddles since i didn’t revise yet (from another vendor not amazon) i can’t tell if it will do the power measurements job i got it for. I did not give it 4 because it does not add training load indexation to polar flow site sini have to put my v800 to work too,.

I love the v650 i can clip it on my other bike. However the wheel base does cover 20 bike wheels. Still a great bike computer. 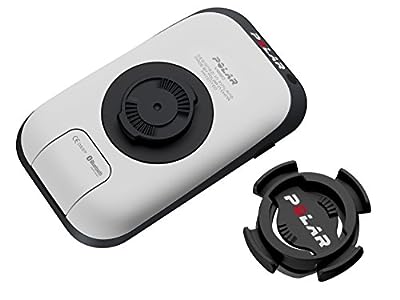 An awesome deal when purchased from warehouse deals. Updates are giving it parity with gps units costing double the retail price. Color screen is sharp and easy to read. Gps lock is quick, bluetooth connectivity ties in with my hr monitor and speed/cadence sensor. Lack of ant+ a non issue for me, and i’ve not invested in any ant accessories. Polar flow sync is okay for a synchronization app; but bluetooth sync to phone would be much easier. – per polar updates bluetooth sync to iphone is coming soonoffline maps are a great feature for tracking route. Haven’t successfully used route guidance as its limited in functionality as only can import from polar’s flow. Needs to support route imports from third party sites. Update 04/01/2016:i have successfully paired with my mio hr monitor and topeak panobike bluetooth speed/cadence sensor.

I gave this product a 3 star, due to the fact that it was a pain to connect to a computer to download your workouts and also to get any updates for the device. I think polar could do better in this regard, what they give you is a bunch of things to try, like uninstalling the polar software and reinstalling it, turning off and on your computer and the device. With this being 2018, one would think that it shouldn’t be such a pain to get it to sync to the software. Other then the formention problem, i did enjoy it the couple of weeks that i used it. It was easy to see the screen and all your information, like calorie burned, distance, hr, miles, etc. So if it’s not important to download your workouts and to get system updates, then this is the cycling computer for you, if those things are important to you look at other cycling computers.

Not so easy to use, configure and syncronize with smartphone app. I mean, not so intuitive, but full of functions at all.

For the price this is a very good product. Switching between bikes that have different setups is a little clunky and the flow website could have better analytics for power analysis. The large screen is very welcomed compared to my garmin 510. The mount fits well on my 90+ stems as placing it on the bars would take up valuable hand space. It needs to be shipped with an out front mount for easier viewing. Bar fly sells compatible out front mounts though.

It interfaces easily with bike sensors and iphone data uploads. Large, easy to read displays and i was surprised at how easy it was to read the heart rate zones with the color-coded graph screen. I’ve always wanted an all-in-one unit that could do everything the v650 can. Had to order additional moutning kit since included mount wasnt able to attache securely enough to my stem.

This has been a great cycling computer after several weeks of usage. I’ve linked it to bluetooth a heart rate monitor, cadence sensor, and speed sensor and they’ve worked well. One quirk with this model is that it apparently utilizes data from the speed and cadence sensors in order to calculate the percentage of the incline/decline you are on (don’t ask me why. ), so you’ll need these sensors to get this data. Third-party sensors work fine with it though, so that can be an option. The computer is simple to use and has quite a large set of data to display and screen configurations to use. The computer is a little smaller than a iphone 3gs (if that’s any help). I use it for road cycling and have it mounted without problem on my stem. The data from the computer can be transferred by usb cable to a polar flow account (which are free to setup) or connected to your android/ios smartphone via bluetooth and the polar flow app, which beams the data to your phone and then to your polar flow account. I read that some people have had issues with this, but it works fine on my iphone using ios 9. 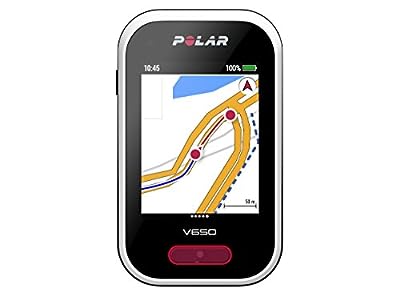 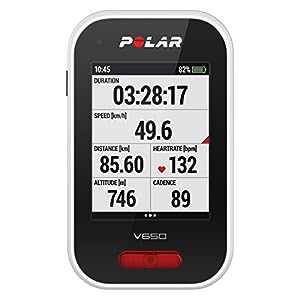